Since the start of 2019, Bedford-Stuyvesant has been the second most active neighborhood in the entire city for new development plans. During that time there have been over 161 new building plans filed in the neighborhood, which trails only East Flatbush. Those plans have called for the construction of over 4,500 dwelling units, the fourth most in the city, behind Long Island City, Gowanus, and Jamaica.

PincusCo took a look into those plans to find out who is behind multiple projects, and rank the most active developers in the neighborhood by the number of projects filed, the number of units and the number of square feet.

Last week, PincusCo took a look at the most active developers in Williamsburg over the same period of time.

The analysis looked at all new building plans filed in Bed-Stuy since January 1, 2019, that called for the construction of a building that was at least 2,000-square-feet in size. The analysis removed all projects marked as withdrawn.

The analysis found that there have been 20 developers who have been responsible for two or more projects during the time span examined.

The Department of Housing Preservation and Development was behind the most projects over the period, with 32 plans filed. Of those, 15 were new building plans for one- to three-family homes which totaled 43 units. The remaining 17 plans called for residential buildings with four or more dwelling units, totaling 277 units. The largest plans called for the construction of a 60-unit, 39,835-square-foot building at 778 Myrtle Avenue. The most recent plans called for the construction of a seven-unit building at 187 Chauncey Street, filed on October 21 of last year.

Farhad Bokhour was behind the second most plans with six, followed by Isaac Broyn who had three total plans, and then a series of developers who each had two plans.

BEB Capital’s plans for the construction of a 425-unit, 508,632-square-foot building were the largest plans filed over the period examined. BEB Capital confirmed with PincusCo that they will be working alongside Brooklyn-based developer Totem to construct the project. The plans call for the construction of the most dwelling units in the neighborhood in at least the previous 10 year. The building, which will be located at 1065 Atlantic Avenue, will have four retail spaces. 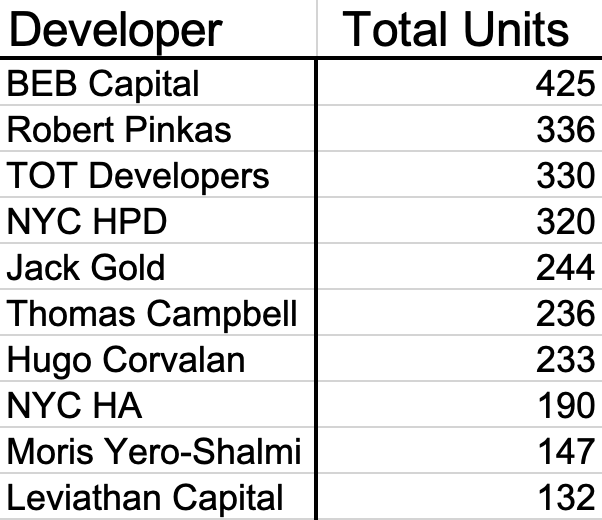 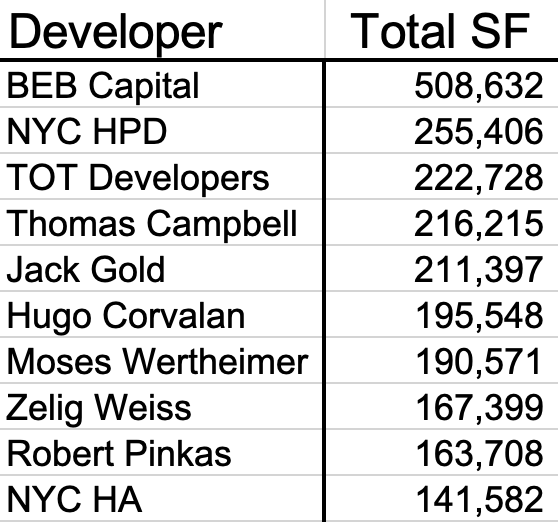 Moses Wertheimer was behind two non-residential buildings. Earlier this month, the developer filed a permit application for the construction of a 71,574-square-foot mixed-use commercial office building at 25 Spencer Street. They were the first office plans in the previous 12 months in Bed-Stuy. Back in March of 2019, the developer filed plans for a nine-story, 90,213-square-foot building with 46,225-square-feet of community space, 33,212-square-feet of manufacturing space, and 7,521-square-feet of commercial space at 466 Flushing Avenue.