PincusCo looked at all new building plans filed in Williamsburg since January 1, 2019, that called for the construction of a building that was at least 2,000-square-feet in size. The analysis removed all projects marked as withdrawn.

The analysis found that there have been 17 developers who have been responsible for more than one project during the time span examined. 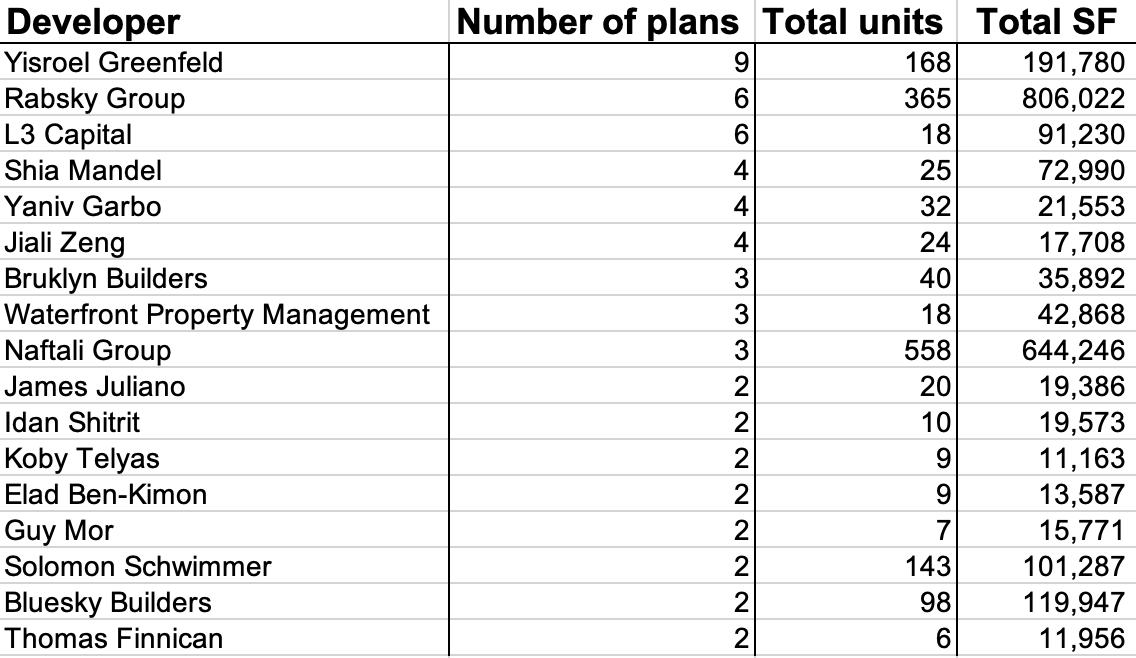 Yisroel Greenfeld was behind the most projects over the period, with nine. The largest of the nine plans, filed on September 25, 2020, called for the construction of a 53-unit, 35,915-square-foot mixed-use building at 209 North 11th Street.

Rabsky Group and L3 Capital were each behind six plans. Rabsky Group filed plans for a series of buildings at a site they purchased for $12.8 million in 2012 from Pfizer. L3 Capital acquired 14 parcels from RedSky Capital valued at $145 million last year and have since filed numerous plans, including a 16,750-square-foot retail building at 184 Bedford Avenue.

Naftali Group was responsible for the most dwelling units planned in the Neighborhood, with 558. The developer filed three plans at the same site located on Kent Avenue.

David Walentas’ Two Trees Management filed plans on December 23, 2021, for construction of a 399-unit, 444,575-square-foot building at 105 River Street in Williamsburg, the second most units from any developer since the start of 2019.

Rabsky’s plans accounted for the most square feet filed in the neighborhood, with 806,022-square-feet of construction.