Gary Barnett’s Extell Development bought out partners and obtained $440 million in financing for a large 13-parcel assemblage at Fifth Avenue between 46th Street and 47th Street in Midtown, according to city records and a source familiar with the transaction.

Extell bought out Hong Kong-based Meridian Capital Limited’s stake, valued at $263.7 million, in the assemblage, city records show. The transfer, which took place on December 18, was for a 61.91 percent stake.

At the same time, Extell bought out SL Green Realty’s interest held in one of the parcels, 562 Fifth Avenue, for $52.4 million, city records showed.

In addition to taking greater equity control, Extell financed the transactions with a $440 million debt package composed of a $340 million senior loan provided by JPMorgan Chase and another bank, and a $100 million mezzanine loan from the South Korean investment conglomerate Meritz Financial Group for a project that will likely be an office building, the source told PincusCo Media.

The site is one of the largest assembled in Midtown in years, extending the 200 feet from 46th Street to 47th Street, with about 150 feet of frontage along Fifth Avenue, 228.5 feet along 46th Street and 150 feet along 47th Street. To put that in context, Extell’s International Gem Tower at 50 West 47th Street is on a parcel that’s a full block through, or 200 feet, but it’s just 125 feet wide.

Barnett and Meridian did not immediately respond to a request for comment.

Extell has partnered with Meridian, founded by Kazakh businessmen, in the past, including at their joint tower project at 50 West 66th Street.

Meridian has been invested in the assemblage Fifth Avenue project since at least 2011, when the firm assumed a $10.3 million loan given to Extell for one of the pieces of the assemblage, 3 West 46th Street.

Extell began buying up pieces of the site as early as 2008. The first acquisition was 3 West 46th Street for $16 million, although the buying entity was not listed at Extell’s office address. The entire package was acquired for approximately $540 million, and had $313 million in debt before the refinancing, a PincusCo analysis of the parcels found.

The nine building along 46th Street and up most of Fifth Avenue have been demolished, while permits have been applied for or issued to demolish the other four buildings, a review of Department of Buildings records found.

JPMorgan Chase has made significant loans to Extell in the past, including $500 million in debt provided in late 2018 secured by four sets of properties which included a development assemblage at 251 West 45th Street.

And the bank led a group that in early 2018 provided a $900 million construction loan to build Extell’s Central Park Tower. 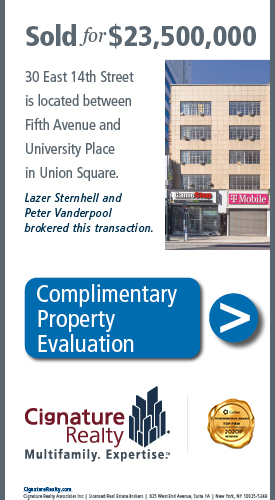