An affiliate of the Catholic Charities, am arm of the Archdiocese of New York, on March 23, filed a permit application for construction of a 126-unit, 104,674-square-foot mixed-use building at 671 Tinton Avenue in Longwood, the Bronx. John Dibattista, the technical project manager for the New York Institute for Human Development, filed the plans. The building, with an alternate address at 799 East 152nd Street, is known as St. Anselm and will be for family housing, with an estimated completion date in 2024.

The estimated job cost is listed as $40 million.

The plans call for the construction of the most dwelling units in the neighborhood in the previous 12 months. In total there have been 13 new building plans filed in Longwood in the last 12 months.

The plans call for the construction of a 123-foot-tall, 12-story building and were filed with the New York City Department of Buildings under job number X00695344. The development site spans three tax lots.

Below are renderings for the development. 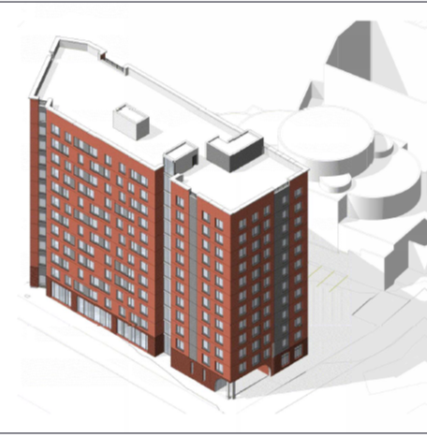 The project is described in the filing as: filing new 12-story mixed-use building (residential & community facility) as per plans.

The architect listed is Eskw/A.