William Gottlieb Real Estate, led by Neil Bender, recorded the $6 million purchase of a West Village walkup yesterday, adding to its approximately 100-building portfolio that spans more than 1 million square feet. To better understand the company, PincusCo analyzed the firm’s assets as they are disclosed in city records. The findings were not vetted with William Gottlieb Real Estate.

The bottom line is the company owns 1.05 million square feet of space through 103 buildings, according to the PincusCo analysis.

The company owns and operates the bulk of that itself, but is also involved with several large development projects in partnership with Bobby Cayre’s Aurora Capital Associates.

The holding were built up by William Gottlieb decades ago, and are concentrated in the West Village, Greenwich Village and the Meatpacking District. However the company owns clusters in other neighborhoods including Chelsea, the Lower East Side, Nolita and others. The portfolio is entirely in Manhattan.

William Gottlieb and Aurora have partnered on several high-profile projects including 40 Tenth Avenue, 46-74 Gansevoort Street, 540 Hudson Street and 134 Jane Street. The square feet calculated does not include new square feet that has not yet been constructed.

The bulk of the existing properties are residential in nature, spread between mixed-use and walkups. Gottlieb is a major owner of walkups in the West Village and Greenwich Village, with 17 such properties out of a total of about 600 (excluding 2- and 3-unit buildings), though that pales in comparison to S.W. Management which owns dozens of the building class in those neighborhoods. 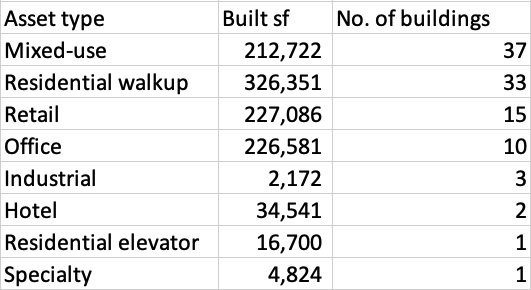 In terms of William Gottlieb’s residential properties, the the largest number of apartment units are in walkups with stores, accounting for 18 buildings with 237 units. Those are followed by two classes of walkups without stores with a total of 209 units. The portfolio only has one elevator building, according to the analysis, which has 22 residential units.