Nearly two years ago, in July of 2020, PincusCo took an in depth look at 10 delayed hotel developments, accounting for over 3,500 planned units, in Queens. Today, PincusCo is checking back in on some of the plans filed from developers like Chris Jiashu Xu, Toyoko Inn Co., and Century Development Group to see if there has been any new activity at the sites.

For the original analysis, PincusCo Media looked at hotel projects of 50,000-square-feet or larger in Queens, pre-filed in 2018 or earlier, that had not yet been permitted. To qualify, the plans had to have been active, meaning they have not been withdrawn by either the developer who filed them or by a different party who had since acquired the property. Additionally, no plans for a different new building can have been filed afterwards.

The largest delayed plans came from Toyoko Inn Co., which in 2016 filed plans for a 50-story, 514-foot, 260,857-square-foot hotel with 1,260 rooms at 24-09 Jackson Avenue. According to sources, Charney Companies and Tavros Capital are in contract to buy the property, which can hold up to 267,000 square feet of residential construction as of right, according to an article from The Real Deal earlier this year.

A report from earlier this year stated that the developer was looking to sell the site for around $60 million. The report from The Real Deal stated that a controversial proposal from Mayor Bill de Blasio and other city representatives which could greatly restrict hotel developments by requiring special permits could be behind the reason to sell.

On February 11, Charney Companies filed a permit application for construction of a 54-unit, 61,639-square-foot mixed-use building at the site. Zoning diagrams of the building can be seen below. Developers sometimes file smaller plans in order to get the foundation progress necessary to comply with current 421a regulations, so the ultimate plans may end up being larger. 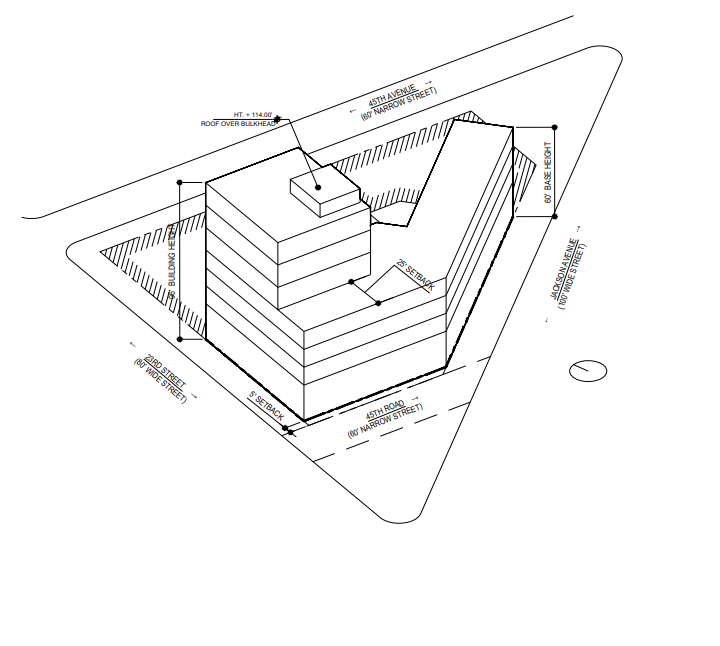 The next largest plans, filed back in 2008 by Flushing developers and brothers, Chris Jiashu Xu and George Xu, called for the construction of a 255,245-square-foot, 144-foot tall hotel, at 41-19 21st Street in Long Island City.

The brothers teamed up with Betty Hsu to buy the Long Island City parcel, which is north of Queens Plaza, for $12.75 million the year prior.

The plans were disapproved in 2009 and have not been permitted, nor have any new plans been filed at the site. Additionally, a partial stop work order currently exists on the property. The developer could not be reached for comment.

One of the largest delayed plans which had been approved by the NYC DOB in the original analysis was filed by George Xu’s Century Development Group in the early fall of 2018. The plans called for the construction of a 152-foot tall, 13-story, 152,161-square-foot hotel with 282 rooms at 35-32 Leavitt Street. The plans have since been permitted, with an initial issue date of September 28, 2020.