The family-owned firm Ross and Ross LLC through the entity Roder 203, LLC paid $2.9 million to Alexander Figueroa through the entity The Pedestrian Corp. for the midblock retail building at 1914 Third Avenue in East Harlem, Manhattan. Ross and Ross, founded by the late real estate investors Morton and Leonard Ross, owns at least 63 parcels in New York City, with a concentration between 106th Street and 109th Street and Third and Lexington avenues, according to an analysis of city property records. The portfolio was not confirmed by Ross and Ross, which operates buildings under various limited liability companies. 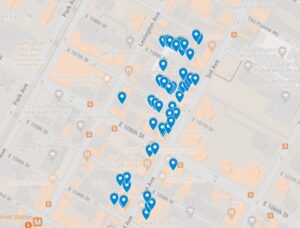 The deal closed on April 14, 2022 and was recorded on April 21, 2022.
The property has 3,965 square feet of built space and 15,023 square feet of additional air rights for a total buildable of 18,988 square feet according to PincusCo analysis of city data. The sale price per built square foot is $718 and the price per buildable square foot is $150 per the PincusCo analysis. (The price per square foot analysis is the transaction price divided by square feet as reported in public records and assumes no air rights have been sold.)
The signatory for Alexander Figueroa was Edward J. Bullard Jr. The signatory for Ross and Ross LLC was Derek Cohn. The seller was Alexander Figueroa who obtained control of the company following the death of Abner Figueroa.

Prior sales and revenue

There were no lawsuits or bankruptcies filed against the property since September of 2020. In addition, according to city public data, the property has not received any significant violations in the last year.

There are no active new building construction projects or major alteration projects with initial costs more than $5 million on this tax lot.

In East Harlem, the majority, or 51 percent of the 63.1 million square feet of commercial built space are residential elevator buildings, with specialty buildings next occupying 21 percent of the space. In sales, East Harlem has 2.1 times the average sales volume among other neighborhoods with $571.7 million in sales volume in the last two years and is the 22nd highest in Manhattan. For development, East Harlem is the 9th most active neighborhood among other neighborhoods. It had 4.3 million square feet of commercial and multi-family construction under development in the last two years, which represents 7 percent of the neighborhood’s built space.

On this tax block, PincusCo has identified the owners of eight of the 21 commercial properties representing 144,065 square feet of the 231,350 square feet. The largest owner is Trise Development, followed by New York City Housing Authority and then Benjamin Soleimani. There is one active new building construction project totaling 8,021 square feet. It is a 10-unit, 8,021-square-foot R-2 building developed by Farhadian Mansour with plans filed January 6, 2016 and it has not been permitted yet.

the majority, or 41 percent of the 390,265 square feet of built space are specialty buildings, with residential elevator buildings next occupying 28 percent of the space.

Within a 400-foot radius of 1914 3rd Avenue, Pincusco identified seven commercial real estate items of interests occurred over the past 24 months.
Of those seven items, two were sales above $5 million totaling $19.7 million. The most recent of the two was WG & Associates Management And Development which bought the 23,550-square-foot, 28-unit rental (C1) on 170 East 105th Street and six other properties for $12.2 million from National Equity Fund on April 19, 2022.
Of those seven items, five were loans above $5 million totaling $46 million. The most recent of the five was William Schneider which borrowed $7.8 million from New York Community Bank secured by the 16,135-square-foot, 24-unit rental (D6) on 221 East 105th Street on April 20, 2022.