The BBL, an acronym for the Borough, Block and Lot, is a 10-digit number that is the unique property identifier for a New York City parcel. The BBL is one of the data “keys” used to connect and compare distinct NYC databases.

A parcel represented by a BBL can be one building such as the Empire State Building at 350 Fifth Avenue (screenshots from the NYCityMap site), 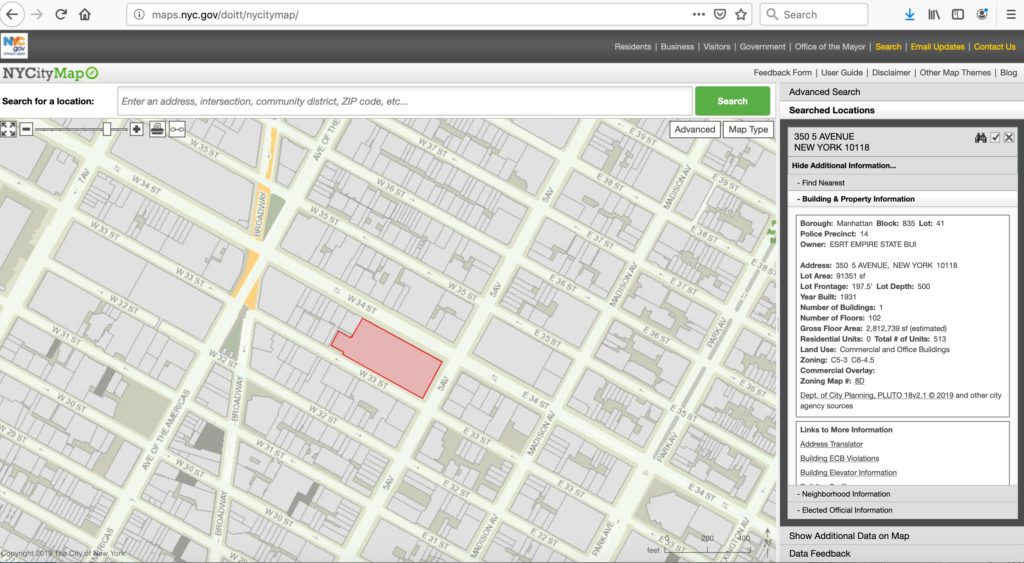 multiple buildings such as Stuyvesant Town, with BBL 1009720001 and many addresses, including 240 First Avenue, 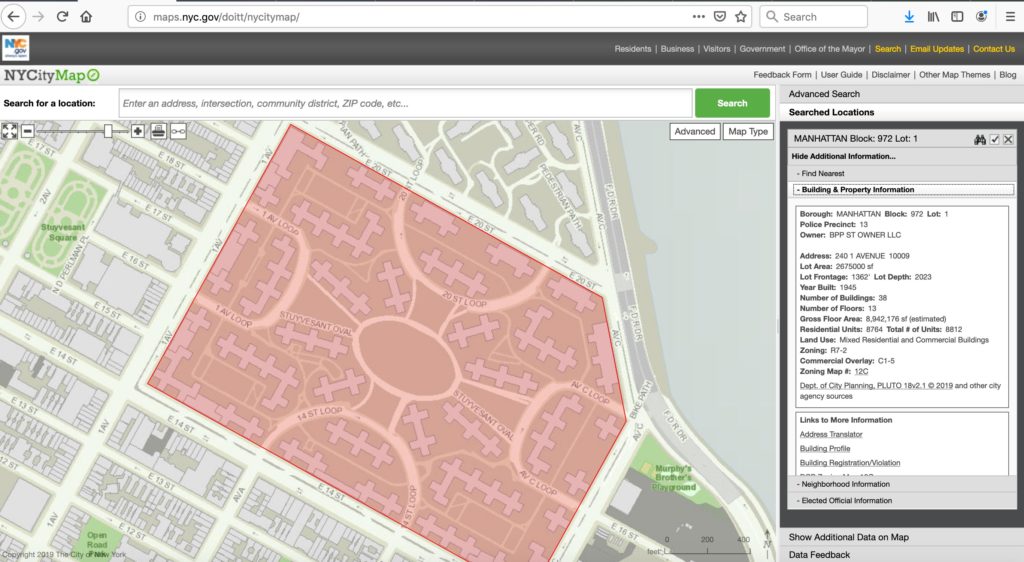 a vacant lot or under-construction development site like 1241 Broadway, 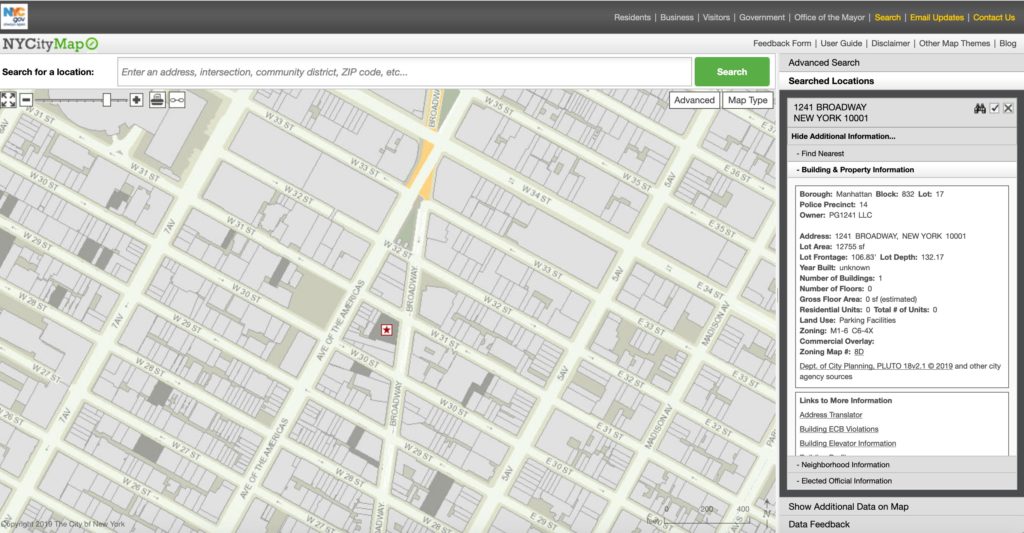 or in the instance of a Condominium building such as 56 Leonard Street, it can be just a portion of a building. Below is a screenshot from the Digital Tax Map website, which links from the GIS site under the link “DOF Digital Tax Map.” 56 Leonard is composed of 148 unique tax lots, ie BBLs. 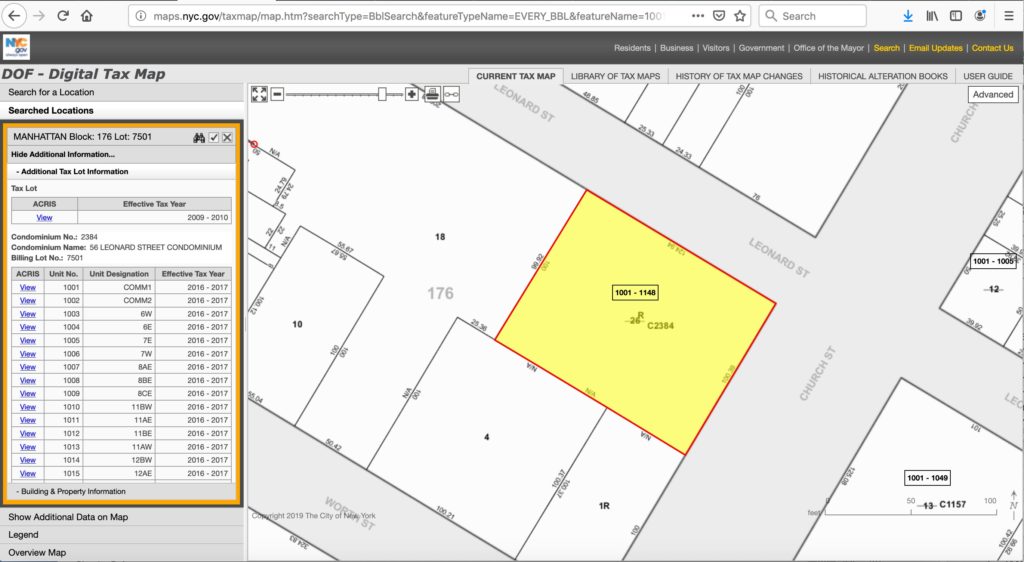 To find the BBL for a city parcel, navigate to the GIS site at http://maps.nyc.gov/doitt/nycitymap/

and enter the Address. The BBL will be displayed on the upper right of of the screen

The BBL is composed of 10 digits. The first digit is the numerical representation (1 to 5) of the borough, the next five digits are the city Block, and the last four digits are the Lot. Often the borough, block and lot are written out like this: Manhattan, Block 972, Lot 1, but the 10-digit number is 1009720001. Leading zeroes are added so that the Block is five digits and the lot is four digits, like this Manhattan, Block 00972, Lot 0001,

The Block is generally unique to an actual city block, but there are many exceptions. For example, some Block numbers are used over two adjacent city blocks, and a few extend for multiple blocks, for example Brooklyn’s Block 7405. The block numbers generally start small at the base of Manhattan and get larger as they head north. In Brooklyn they follow a similar pattern starting from Brooklyn Heights heading east and south.

An anomaly to watch for is Battery Park City, which is on one tax block, 16, with many individually owned properties as well as condominium and cooperative buildings (the land is owned by the state and leased). In addition, the Brooklyn Navy Yard is also one tax block and lot.

Condominiums are described more fully here, but to understand BBLs, you need to recognize their identifier. If the Lot (ie the last four digits of the BBL) starts with 75, for example “Lot 7501,” then it’s a condo. The condo lot number is generally chronologically sequential starting with 7501, then 7502, etc. depending on the number of condo buildings within the tax Block. For example the first condo created on a tax lot is virtually always 7501, then the next condo is 7502, then 7503, etc.

CAUTION: “condo” does not guarantee the building is a “residential condo” in common parlance. For the purposes of the city, a condo building is simply a building divided into multiple condominium tax lots, which can be retail, office, industrial or parking condo units, in addition to the residential units.

TIPS: You can save a direct link to Acris using the BBL and this script and changing the borough, block and lot numbers: a836-acris.nyc.gov/bblsearch/bblsearch.asp?borough=1&block=00027&lot=0009